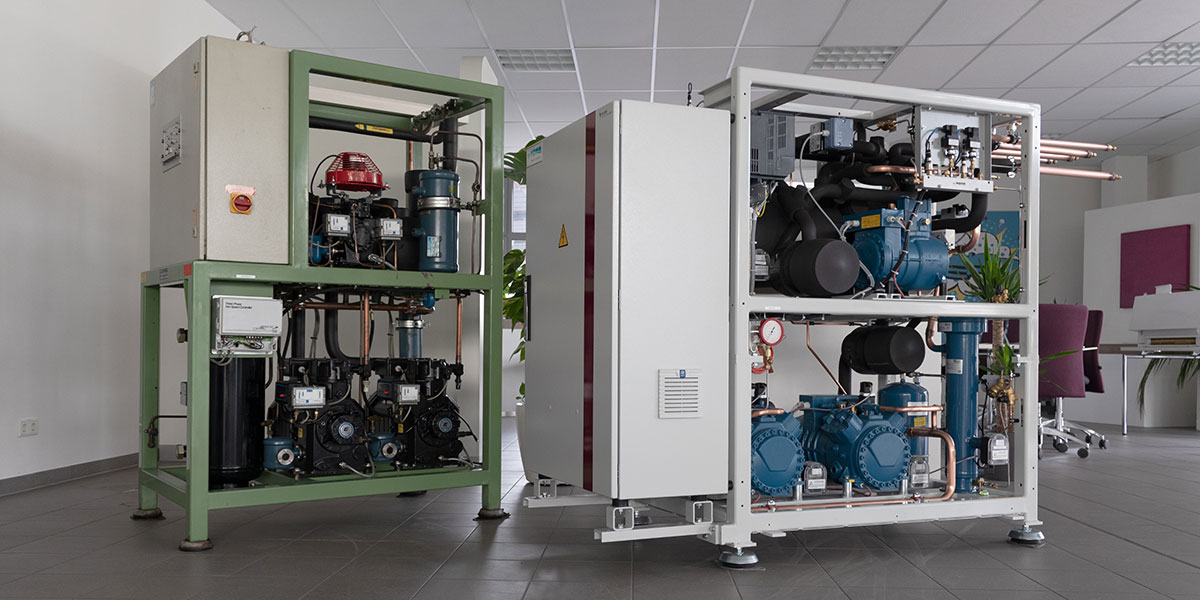 From the first system refrigeration unit to the TEKO series solution

A technically innovative retail store – that’s what Penny has been from the outset and still is today! From the first standardised system chiller on the market to today’s environmentally friendly refrigeration solution using CO2. Everything has been developed hand in hand by Penny, TEKO and Wurm.

1996: In Frankfurt’s Unterliederbach district, plans were afoot for a new Penny retail store. At that time, the state of the art was to “serve” normal and deep freezing with separate multi compressor system. Since the discounter decided to use ready-to-plug-in LT islands, the cold room was the only cooling point for low temperature (cooling) in a typical discounter such as Penny.

The use of condensing units was considered to be a technical solution. Yet this represented a technological relapse back to the 1970s, resulting in poor efficiency values and high service risk.

With this in mind, Rolf Schmidt – who was responsible for refrigeration technology at Penny at that time – approached us and asked for a refrigeration system that could do this as part of a closed system. This should be compact, highly efficient and equipped with a modern refrigerant. It should also meet our aspiration to simplify the handling of refrigeration technology for installers. This resulted in an idea to integrate medium temperature (cooling) and the additional cold room as part of a single standardised system.

Planned. Completed. After a while, we released a prototype for our “DISCPACK1”, which used the refrigerant R404A at that time. Its introduction at the REWE Group was a complete success – the advantages of this technical innovation were utterly convincing across the board. We therefore developed the first system solution and set a milestone in food refrigeration.

Not least because of the small footprint of only 1.5 m2, the DISCPACK1 was used in series production at Penny. The unit in Unterliederbach ran almost problem-free for 25 years. This project also fundamentally changed things for TEKO: We started to develop optimised refrigeration systems, tailored to the needs of the food retail trade – something we still specialise in today.

The advantages of this system refrigeration unit, compared with the former individual units, were rapid assembly time (50% quicker), a much lower amount of estimated refrigerant and greatly improved system hermeticity thanks to approximately ¾ fewer soldered and screwed connections. The resulting positive side effects – such as lower energy consumption and the equally low space requirement given that no machine room is required – made the DISCPACK1 the ideal multi compressor system for a typical discounter store.

The successor “DISCPACK2” was even awarded the 1999 environmental prize thanks to its low TEWI value when using R 134a in conjunction with an LT cascade and Wurm’s advanced FRIGOTAKT process.

Not without Wurm as our partner

Even then, Wurm was a key, central development partner. The FRIGOTAKT control system was specially developed for the DISCPACK1 to effectively coordinate cooling points. Using the new process, high efficiency could be achieved without making the technology unnecessarily complicated. 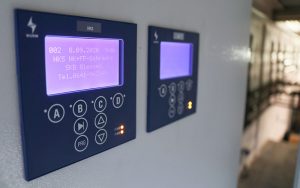 FRIGOTAKTplus permanently recalculates the current load case online. The procedure checks whether, for example, the activation of a compressor or the delayed activation of a cooling point makes sense and thus optimises the overall performance of the cooling system. 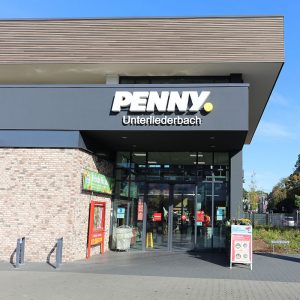 2019: As was common practice for a discounter, the original retail store in Unterliederbach was integrated into a residential block. However, 25 years after its opening, the retail store was getting on in years. To be able to guarantee technical innovations, the existing retail store was not converted and instead, a new building was constructed 500 metres away.

A lot has happened since the DISCPACK1 was first installed in 1996. Natural refrigerants are at the top of operators’ wish lists. As a result, the new building features our series solution ROXSTAcube mini with the environmentally friendly refrigerant CO2 in place of the DISCPACK. From a design point of view, the unit has not changed significantly – even today, it still only takes up as much space as a pallet.

Heat recovered from the refrigeration system is used to heat the retail store during the colder months of the year, thus allowing the operator to make further significant energy savings.

The new building also offers many advantages in terms of space: In the old building, the refrigeration plant was located in a narrow, poorly accessible cellar in an adjacent residential building. In order to save as much space as possible, the ROXSTAcube mini needed be placed on an intermediate floor in the warehouse, which was made possible thanks to the unit’s divisible frame. This meant that both components of the ROXSTAcube mini standing beside one another could be adjusted to 1.80 m, whereas the standard height above each other is 2.10 m. 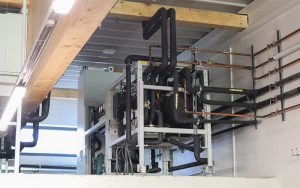 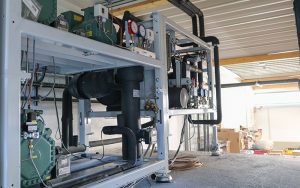 The in-house bakery, in which dough pieces are baked fresh every day, posed a further challenge. To save space, a combined storage room was developed. This is accessible from both the bakery (with its constantly running ovens) and the supermarket (for stocking goods) and thus has special cooling requirements. The solution to this challenge is a speed-controlled compressor, which has also been used in all comparable Penny retail stores since 2019.

From an environmental point of view, the Penny Group is an absolute pioneer, having already equipped its retail stores with seminal technology back in 1996. This was due to the innovative spirit of Penny pioneer Rolf Schmidt, as well as Penny’s wise forward planning with regard to the European F-Gas regulation, which nowadays results in market changes and an ever-growing number of environmentally friendly technologies.

With its output (MT up to 65 KW / LT up to 9 kW), the ROXSTAcube mini is the ideal solution for discounters. Of course, waste heat from the refrigeration system is also used efficiently, such as to heat the store, thereby creating a completely environmentally friendly refrigeration system.

Mr Martin Weydemann (REWE Group Site Manager) sees a bright future for the ROXSTAcube mini in the Unterliederbach Penny: “Provided there are no further changes to the refrigerant ordinance, we expect a service life of 15-20 years for this unit with a clear conscience.” Opting for CO2 as a refrigerant is also a good option in terms of price, Mr Weydemann adds: “As we all know, the initial investment is the most expensive. If you invest in CO2 and the units run for 20 years, then you will earn money and make a profit.”

The historic DISCPACK1 from the Penny retail store has been at the TEKO showroom in Altenstadt since April 2019. It is probably one of the last remaining DISCPACK1.

For Belgian consumers, e-commerce in groceries is not just a coronavirus-related trend, but has become a genuine habit. In response to this exponential growth, Carrefour Belgium announced in September 2020 that it had entered into an exclusive partnership with international company Food-X Technologies Inc. in order to benefit from their cutting-edge software. By 2026, Carrefour […]
16. December 2021

Article from the Wurm magazine FRESH UP 02 2021 (published in summer 2021) >> FRESH UP 02 2021 << Ongoing procurement crisis for materials and components is also affecting our production facility In fact, the material bottlenecks for components, raw materials and accessories have occurred at a level far exceeding past cyclical waves of demand (allocation). There […]
16. December 2021
×